Childhood is typically one of the greatest times in our lives. During childhood, we are often filled with the joy of being young and coming into our own person without having the slightest care in the world. English poet, Sir John Betjeman, once stated that “Childhood should be measured out by sounds and smells and sights before the dark hour of reason grows.” Unfortunately for some, this early joyous time is already plagued by a darkness known as “childhood cancer.” With 43 children succumbing to this disease every day, childhood cancer is one of the toughest things a child may endure. Although it is our children who are diagnosed with this illness, they are not alone in this excruciating fight. Read about Leigha Martinelli’s experience with childhood cancer and how her loved ones gathered to support her through her battle.

“Playing soccer and swimming were two of my favorite things to do. At age eight I was a good soccer player. After getting side tackled in a game at Joe Davidson Park, I began limping.  I continued to complain about the pain.  We went to the doctor and were told it must be “growing pains” or “soccer injury”. The pain persisted so Dr. Moffit suggested we go to Duke Children’s Hospital. We did an MRI in Alamance County and found a spot on my hip.  The pre-diagnosis was that I could have juvenile arthritis.  The day after our first visit to Duke, my parents received a call telling us that I could have cancer.  Our life as we knew it was over.  Our family and friends were devastated.  Our friends gathered quickly and were on their way to our house when the phone rang again.

We started testing to find out what type of cancer I had. We knew some were more treatable than others. A week later I was diagnosed with “Neuroblastoma”, one of the deadliest childhood cancers.   I was stage 4 when the cancer was found. That is the most critical stage.  I had tumors in my head, spine, near my heart, and all through out my body.  Neuroblastoma gets inside the bone marrow and tumors appear on the nerve endings close to the bone.  Once in the marrow it doesn’t stop.

Duke informed my parents that I had less than 10% chance of survival. My protocol was scheduled with heavy doses of chemotherapy (6 mths.) to start in several weeks, followed by a stem-cell transplant.  However I did not make it several weeks. My body was so filled with tumors it hurt me to be touched.  Alamance County rescue unit was called to rush me to Duke.  The two EMT’s that took me cried as they consoled me. They stayed in touch with us afterward.

I immediately started chemo at Duke. The treatment was unbelievably horrible.  I threw up blood constantly. My parents split up into 12 hour shifts in the hospital. Even with the hospital crew, I had to have constant care. We called in friends and family to help. I continued to lose so much blood and was constantly given transfusions. My body weight dropped to 62 pounds. I wasn’t able to swallow my own spit or eat for a whole year. I was on constant TPN. Several of my nights were spent in intensive care.

The doctors told us that the chemo had to be this aggressive to kill the cancer. The tumor near my heart was going to have to be removed. After the surgery I was back in ICU with a breathing tube.  In the midst of the terror, friends and family were very supportive. My classroom at Smith Elementary sent cards and videos, as well as other schools that were concerned about the little 9 yr old girl that was fighting such a terrible disease.

My health was declining but my spirit was not. I told my parents one night that I knew God was going to heal me but I wondered why it was taking so long.  We continued to pray. My spirit, faith and hope helped to keep my parents going. Duke would always give the children surprised visitors like Jeff Foxworthy or the Duke men and women’s basketball team. And that’s how I became good friends with one of the players for the Duke Women’s Basketball team named Sheana Mosch. She came with the rest of her teammates just visiting all the sick kids at Duke but ended up coming every single day.  Sheana became not only my best friend but my hero. She has an enormous love for the Lord and tremendous faith. Reading a scripture to me everyday was always one of my favorite things she did. Not once did she doubt my chance for survival and during my journey she got drafted to the WNBA. This was everything she had worked for and if anyone deserved it it was Sheana. But since I was still so sick she denied her dream just so she could stay by my side. God gave me the best of the best and she helped our entire family get through.

Our family could not believe the support we were given. A list was started that had people sign up so that meals were taken to our house for my two brothers who were left at home.  Signs were posted at churches, on billboards, banks, insurance agencies, hair salons and more. They read…  “PLEASE PRAY FOR LEIGHA MARTINELLI”.

Children sold cookies, kids had lemonade stands, and jars were put in restaurants from people who barely made ends meet themselves. Our neighbor mowed our yard for a year and a golf tournament was organized to help us pay expenses that were not covered by our insurance. We had a “caring bridge” website that allowed people from all over to pray for me and to keep up with my condition.

After 14 mths in the hospital, we were informed by the team of doctors that the chemo treatments were not working and that my organs could not withstand anymore.

My parents were left with two choices; one was to give me medication to ease the pain while the cancer took over my body that would end my life. That was not an option for my parents.

The second was an experimental treatment in New York City.  We chose the later.  The treatment consists of antibodies of mice that were injected into my veins.  The treatment was so painful the only medicine that kind of helped was a form of heroine they would inject us with. You could hear the children screaming before you even reached the hall. Each treatment would last between an hour to an hour and a half.

After 8 months of treatment in NY, we received a call that said I could no longer receive treatment. They told my parents that I was one of the 20% that was not improving. We were devastated.  We looked back to the beginning.  There was a couple from St. Marks that had lost a child to brain cancer.  They had spent much time at Duke Hospital.  They suggested we talk to a certain doctor named Joanne Kurtzberg.  This doctor requested we have my brothers tested to see if they were a match for a bone marrow transplant. Although we would be taking ourselves completely off protocol, we opted to do this.

When my parents told my two brothers of the suggestion, my oldest brother Dustin replied, “I know I am a match for Leigha, I know I am the perfect match”. And he was right.  He was a perfect 6 out of 6 match.  After no other choices left, we decided to have a bone marrow transplant using my brother.  The only problem now was I still had too much cancer in my body for a transplant.  Dr. Joanne Kurtzberg told us that she was going to come up with some sort of plan for me.  She did.  She combined three different treatments.

*The second step was five straight days of the maximum amount of chemotherapy to kill off all of my immune system.

*The last being to receive my brother’s bone marrow.

Our chances of survival were small, but our prayers were HUGE. There were prayers coming in from everywhere, all over the world.  We survived through hope.  God gave us a strength that only he could give.  After transplant, I recovered slowly thru the next year.  I had no immune system and was constantly throwing up.  I could not eat on my own.  I was given 24 hour care.  I was fed, and given all medicine thru my veins.  This went on for a year. I was not able to take a shower or bath for two in a half years because of my central lines coming out of my chest. So the FIRST THING I DID WAS TAKE AN HOUR LONG SHOWER!

HERE WE ARE!! PRAISING GOD FOR OUR MIRACLE!!!

A young man named “Micha” was one of the older patients on the pediatric unit that had cancer. He was from a family with many brothers and sisters.  His family and himself were devoted Christians.  After Micha lost his battle, his mom found his journal.  In the journal was an entry where Micha was asking God to witness a miracle before his time on earth had passed.  His mother continued reading thru the days until she saw another entry that read… “Thank you God” Thank you for me being able to witness the miracle of healing”. ‘I found out today that Leigha Martinelli has been healed of her cancer.” 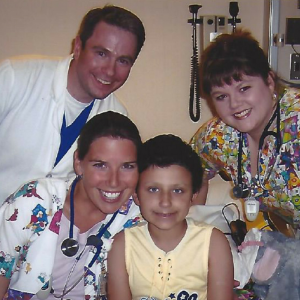