A Thunderclap is an organized social media event that allows a single message to be mass-shared so it is able to make a statement and get noticed. By having everyone share the same message at the same time, Thunderclap helps to create action and awareness.

Join our #BlingedOut campaign, which is being organized for September 15th at 8pm. It’s easy to join, just click on the following link and you can choose to be part of the #BlingedOut Thunderclap on Facebook, Twitter or both! http://thndr.me/g1bP0L By clicking on the link, you are able to automatically schedule a post or tweet that will be posted on the designated date and time. This means you don’t even have to be online because Thunderclap will do it for you! In order for the Thunderclap to work, we need a minimum of 100 people to participate which means we need you to spread the word!

Please help us recruit others by sharing this blog, or posting about the #BlingedOut Thunderclap on Facebook:

Thanks for helping us get #BlingedOut to raise awareness for childhood cancer! 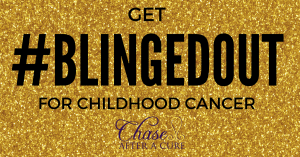