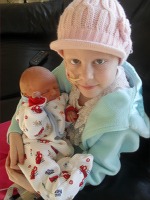 Emily Kate Wooddin was always a healthy, active little girl who rarely experienced any health concerns. So when she became extremely unwell in October 2009, her family knew something was seriously wrong with their daughter. Over the course of 8 weeks Emily experienced a dramatic decline in health, becoming extremely lethargic, and losing her appetite which cost her 4 kgs off her already tiny frame. After numerous hospital appointments, blood tests etc., Emily was diagnosed with a glandular fever type virus to which her family were advised to “ride it out.” As Emily’s health continued to decline, the family pushed and pushed for further investigations. On January 8th, 2010, in Christchurch Public Hospital, a mass the size of an orange was discovered in her abdomen and a lump found on the left side of Emily’s skull. An ultrasound of her abdomen confirmed her family’s worst fears, that their daughter had a malignancy which was discovered to be neuroblastoma. A bone scan and bone marrow aspiration further confirmed that the cancer had metastasized. Her family was taken aside by the oncologist and told that Emily, at age 6, had stage 4 neuroblastoma and just a 20 – 30% chance of survival. The very next day the fight for survival began. Emily was immediately fed intravenously and via nasal gastric feeding. She was in such poor condition given that she had not been eating for 9 weeks that a central line was put in and doctors immediately proceeded with her treatment regime which consisted of 8 rounds of chemotherapy, high dose chemo followed by a stem cell transplant, surgery to remove the tumor and her left kidney, 14 rounds of radiation, 6 grueling rounds of immunotherapy and 6 months of oral Accutane. This treatment was accompanied by approximately 20 general anesthetics, ongoing nausea and vomiting, social and psychological issues, complications from the chemo, high temperatures and neutropenia. Emily finished treatment in February 2011 and remained a healthy child until March 9, 2012, when she relapsed in her jaw. After fighting a long courageous battle, on October 30, 2012, at the age of 8 years old, Emily Wooddin passed away. Today her mother, father and siblings miss her terribly.