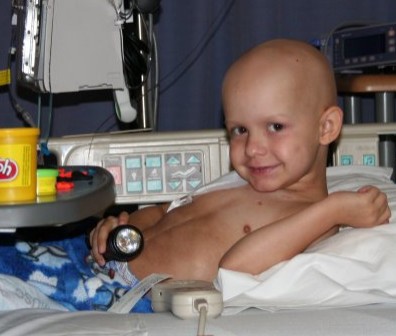 On October 2, 2007, Chase Ringler was diagnosed with stage 4 neuroblastoma. He was always healthy, rarely experiencing even a cold, but one day he woke up with a stiff neck and the next day his family received the devastating news. Chase’s diagnosis began with the discovery of a tumor on his left adrenal gland, which was approximately half the size of a golf ball. Other tests concluded that the cancer had already spread to his bone marrow and skull. On October 4, 2007 he underwent a successful surgery to remove the tumor. However, the surgery was not without complications. During the operation, it was discovered the tumor was entangled in the adjacent lymph nodes and as a result, his renal artery was cut, which resulted in the loss of his kidney.
Chase’s treatment consisted of 8 rounds of high dose chemotherapy, bone marrow transplant, 14 rounds of radiation, six months of Accutane and monoclonal antibody therapy. His treatment was very aggressive since risk of relapse is so high and there is no current cure for relapse. Chase showed tremendous strength and courage and thankfully won the fight against neuroblastoma. He continues to this day to warm the hearts of everyone with his smile and laughter.