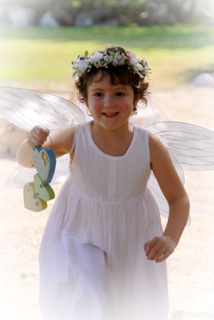 As a precocious, joyful, and strong-willed two-year-old, McKenzie May became a fighter when she was diagnosed with stage IV neuroblastoma. She had never been a very good sleeper but in January 2008, just a month before her third birthday, she began sleeping round the clock and was unable to stand on her own. Her parents took her to the hospital where she was diagnosed with this deadly disease. McKenzie received five rounds of chemo, had a ten-hour surgery to remove the mass in her abdomen, and received an autologous stem cell transplant that included another five days of mega-dose chemo. After nine months of treatment, she was declared in remission. Afterwards, McKenzie and her family celebrated, and she was able to go to Disney World courtesy of the Make-A-Wish Foundation. However, after her fourth birthday in July 2009, McKenzie was diagnosed with recurrence. She lived her last five months with gusto taking up ballet and spending wonderful time with her family. Sadly, she lost her fight on December 8, 2009 just two months shy of her fifth birthday. Her family believes today that McKenzie waits for us in heaven with no more pain or cancer. They miss her dearly. You can find more about their journey at www.unshakeablefaithbook.com.