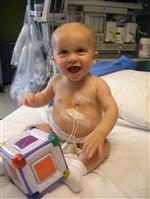 Chase Towne was the definition of a happy baby. He was growing, crawling and pulling up on things by 8-months-old. Yet in April 2009, Chase’s family noticed a pain in the baby’s right hip and took him to the pediatrician which led him to the ER, an operation in his hip, and more shockingly later, a tumor in his abdomen the size of a softball, spots on his liver, kidney, spine and two tumors in his skull. Soon thereafter, Chase’s family learned their son had stage IV neuroblastoma and was given less than a 30% of survival. Over the next 18 months, Chase began his fight, receiving 11 rounds of chemotherapy, 5 major surgeries, stem cell retrieval, over 100 days in the hospital, and many days in the PICU. There were many ups and downs during this process. While going through chemotherapy Chase had a bout with a bacterial infection, called C-DIFF, which added to the anxiety and extended his hospital stays. On May 27th, 2011, Chase had a set of scans that came back clean. Since this time, he has had two more sets of scans that showed No Evidence of Disease (NED). Even with these happy and hopeful results, Chase’s Journey is not over. He will continually have scans and tests done regularly to keep an eye on things. Nonetheless, Chase’s family thanks God daily for these positive results and pray they will keep coming.