Fathers play one of the most vital roles in our lives. From the day we enter this world, we look to our fathers to guide us through life’s twists and turns. A father is there to take refuge in during hard times, a friend who is always there to listen to us without judgement, a person who loves unconditionally even when you make the same wrong decision for the millionth time, and most importantly, the fun parent who says “yes” when mom already said “no.” Without a doubt, being a father is one of the toughest jobs known to man. Even though it’s not an easy job, every father intends for their child to have nothing less than a happy, carefree life. But what happens when a father’s dream doesn’t go as planned?

One person who may provide the best answer to this question is Richard Ringler. Richard is the proud father of Chase, who at just three years old was diagnosed with Stage 4 neuroblastoma and was given a 30 percent chance of survival. Upon learning of his son’s condition, Richard found himself overwhelmed with emotions. “Sadness, anger, fear, uncertainty” Richard states. “My first thoughts centered around how this would affect his life…then the realization that he may die.  It was numbing and tiring. After Day 1 of the news, my anger grew thinking about the fact that a 3-year-old child would be faced with such a horrible diagnosis…what had he done to deserve this?”

As a father, there was nothing in this world that Richard wanted more than for his son to be rid of this nightmare disease. “I pleaded with God to take my life in exchange for my son’s health…..I really prayed for this.  It’s hard to say now, but it was a vivid memory of those first weeks after learning about Chase’s diagnosis.”

Although Richard felt defeated emotionally, he knew as a father he had to remain strong for his family. “The emotions simmered down and then I got focused on making sure Chase was at the right hospital for treatment, keeping Erica’s life normal, and making sure Chase was taken care of in the best way possible.”

To survive his diagnosis, Chase was required to undergo an extensive amount of aggressive treatment. This treatment consisted of eight rounds of high dose chemotherapy, a bone marrow transplant, fourteen rounds of radiation, six months of Accutane, and eleven rounds of painful monoclonal antibody treatment. Although it was Chase who was diagnosed, he was not alone in this long and stressful fight.

“Once the shock wore off, you realize you have no choice but to fight and fight hard.  Caving to the negative thoughts wasn’t an option, staying positive and simply addressing the problem/decision of the day was my focus.  I craved a normal routine and work was a good distraction from the world of pediatric cancer.

I prayed a lot…I mean several times a day.  I prayed for Chase, my family and peace of mind.  Shouldering the burden wore me down.  When I finally let go and faced the fact that this situation was to a large extent out of my control…I had peace.  I simply knew that there was a bigger plan for Chase and I needed let it run its course.”

To help cope and make the experience less painful for Chase, Richard and his family relied on a support system that consisted of their immediate family, friends, and church. “Our family and friends really were the key to helping with stress.  Chase spent nearly 300 days in the hospital the first year of his diagnosis and his health didn’t allow for much travel.  The threat of infections and complications from treatment kept us close to home.  All the love I saw pouring out for Chase really helped me cope knowing he was getting a lot of special attention.  My parents and in-laws were awesome about helping out, especially with our older daughter Erica.  They spent a lot of time Charleston with us doing the things that we just didn’t have the time or energy to do while Chase was in the midst of constant medical treatment.

I craved normalcy…our life had turned into constant chaos…normalcy was nice.  We focused on the important things…memories and love.  Playing board games together, trips to the Atrium in the hospital (a big pick me up for Chase while in the hospital,) watching cartoons, maybe a trip to a local park…that was the best coping mechanism.”

Although it may sound ideal to have a support system that consisted of other families who are facing the same situation, this was initially not the case for Richard and his family. “A diagnosis like this is complex and internet searches and talking to other parents is confusing at first because you are not certain how your child’s situation applies to another parent’s discussion about their child.  Then you build a knowledge base (over months) of the disease and realize there are important differences.  It was frustrating at first not understanding the complexity of different treatment paths.  Later on, after about 6 months…it was very helpful and refreshing to talk to people who understand what you go through as a parent of a child with cancer. It was also depressing since most children with Chase’s diagnosis did not usually have a happy ending.  Survivor’s guilt creeps in after you know families for years whose children pass away.”

Chase managed to overcome the odds and beat cancer but he still has to live with the side effects brought on by the harsh treatment plan. And he’s not alone. As a result of treatments such as Chase’s, 2/3 of childhood cancer patients will have long-lasting chronic conditions.

“I don’t feel like it’s over.  Chase will have lifelong effects from the treatments he endured.  While he isn’t being treated, I’m always wondering if it will return, as is commonly the case.  I wonder if he will endure a secondary cancer from the chemo he received, that is known to cause secondary cancer.  My journey will never be over with childhood cancer until there is a cure.”

As many of us know, childhood cancer research is vastly and consistently underfunded, a fact that Richard still can’t believe. “What better cause could there be?  These kids have an entire lifetime ahead of them and I was shocked at the disparity in children versus adult cancer research and funding.  This is why we started raising money for pediatric cancer…the kids behind Chase need less toxic treatments and a better chance of survival than we faced.”

Richard’s advice to other fathers currently experiencing the same fight is to “Keep the focus on your family and the child.  It’s ok to get receive help, people want to help, let them. You are the best advocate for your child, make your voice heard, no one knows your child better than you.

Not every doctor knows best, get two opinions on the big decisions. Be quick with decision making…but not rushed. Seek the centers of excellence for the cancer your child has….they know the disease best. Keep the doctors that you trust involved with your child’s treatment, and avoid those where that is lacking. Research your disease, but don’t get caught up with “Dr. Google” syndrome, there are specifics about your child’s situation that a doctor is better able to address than a story on the internet.”

There’s no questioning it, our fathers play an integral part in our lives.  Life does not provide them with a roadmap on how to succeed at their jobs. Of course, there will be a few bumps in the road. However, every father naturally abides by one golden rule…to provide his child with unconditional love. The love that our fathers have for us is one of the most sacred and purest loves of all. Regardless of the amount of times we may interfere with them and their Sunday night sports or damage their cars in pursuit of our licenses, our fathers’ love for us always remains intact. 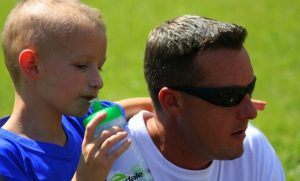